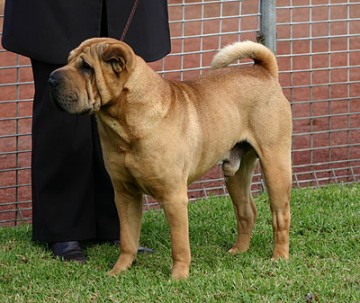 A Brief History
The Shar-Pei originated in China many centuries ago. They were originally used for farming, herding, hunting and guarding. They were then used as "Chinese Fighting Dogs". The characteristics of the Shar-Pei have probably evolved due to this, as their loyal temperament was not of a fighting dog. Shar-Pei, meaning "sand skin", describes their short, extremely rough textured coat. This has been know to give people a rash when they touch the Shar-Pei. The purpose is that it is most uncomfortable in the mouth of another canine. Their small deep set eyes and flat ears are less vulnerable to injury and the looseness of their skin gives them the manoeuvrability to twist and retaliate against their opponent. Eventually as the Western dogs strength and force overcame the Chinese Fighting dogs, the Shar-Pei returned to the peasants for guarding and protection.

When the Chinese Communists came into control they became nearly extinct. During the 1960's there were very few left and they became the rarest dog in the world. In 1970 a man called Matgo Law began a rescue operation of his native breed. A few specimens found their way to interested parties in the United States. Thanks to Matgo Law the breed is no longer an endangered species, it is now an extremely popular breed around the world. 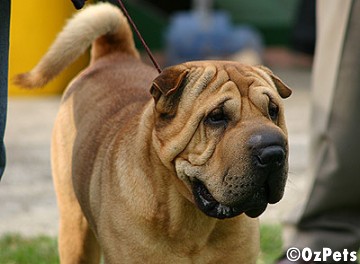 Appearance
The Shar-Pei is famous in Australia, as "Rolly" the chocolate Shar-Pei seen on TV Commercials around the country !!

An alert, active, compact dog of medium size and substance, short coupled and square in profile. Preferred height 46-51cm (18-20") at the withers. Dogs are larger and more powerful than bitches. The Shar-Pei has a number of unique characteristics. The breed has a head which can best be described as "hippopotamus like", very small ears flat to the forehead, loose folds of skin about the head neck and shoulders and a short harsh coat. The Shar-Pei has a blue black tongue. The loose skin and wrinkles are abundant in puppies, but these features may be limited to the head, neck and withers in adults. The muzzle of the Shar-Pei is very distinctive, broad and full. The muzzle is well padded any may cause a slight bulge at the top of the nose. 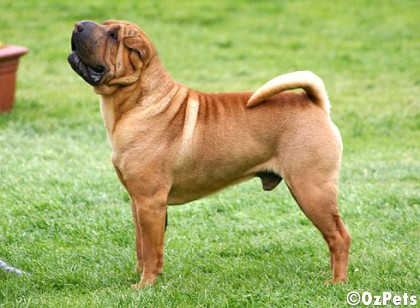 Overview of the Shar-Pei
The character of the Shar-Pei is calm, independent, very affectionate, alert and devoted to people. The Shar-Pei is a wonderful companion and family dog. He is equally adaptable to indoors and outdoors as they are extremely easy to housetrain. Most dogs have an undercoat, the Shar-Pei does not, so remember they are susceptible to weather conditions. They are protective but not vicious, quick to learn due to their high intelligence, good with children when properly introduced, obedient and eager to please his family. He is very loyal to his family and loves them unconditionally. He is standoffish with strangers and does not like to be rushed by them, especially in his own territory. He will generally bark when somebody visits and prefers to take his own time to approach the visitor, to be petted. This is because of his protective instinct.

The Shar-Pei does not need a large amount of exercise, most will exercise themselves if room permits. But they do love to go for a walk, on a lead and if you only have a suburban block, this should be done as regularly as possible. Shar-Pei's can easily become couch potatoes and have a tendency to become overweight, so exercise is very important to maintain a healthy dog.

The Shar-Pei love and need human contact, so if you are considering owning a Shar-Pei, they are not a dog to be left at home alone and forgotten about. 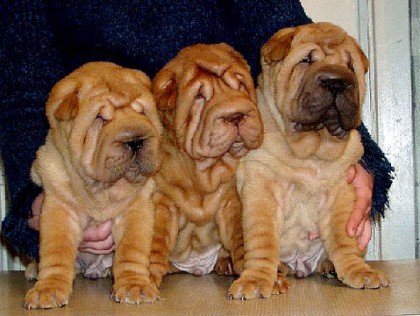 Health
Some of the problems Shar-Pei can suffer from are Hip Dysplasia, Luxating Patellas, Entropian, Skin problems and Allergies. Some of the health problems are hereditary and responsible breeders make every effort to control these disorders in their breeding stock. Try to view both parents of the pup you are wanting to buy, however if the bitch is out of coat it is common that she has lost it because she has just whelped. Diet is also an important part of owning a healthy happy Shar-Pei. The Shar-Pei requires a low protein diet so check the labels on commercial food brands and make sure they are low in fat and protein.